Nobu Hospitality is delighted to announce the opening of Nobu Hotel Shoreditch this Saturday 1st July, located in the heart of London’s artistic quarter.

The property boasts 143 guest rooms and seven suites, meeting space, a lobby bar and 240-seat restaurant, which lies at the heart of the building, spanning almost the entire footprint of the hotel. 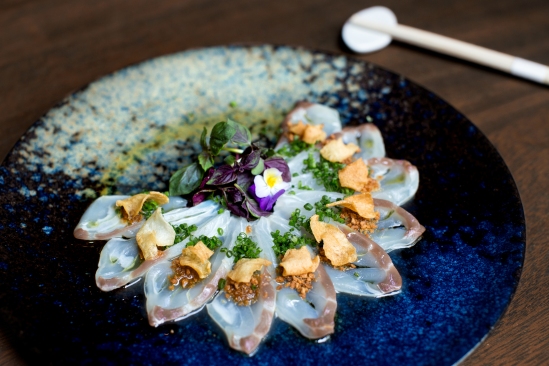 Guests to the hotel and restaurant will be able to enjoy genre-defining Nobu signature dishes, exquisite sushi, and Shoreditch-inspired menus and cocktails. For those wishing to witness the theatre and artistry of Nobu chefs in action there is the exclusive 10-seat sushi bar and an 18-seat chef’s table, with prime views of both the main kitchen and sushi chefs at work.

Giving back to the local area, Nobu Hotel Shoreditch will also be opening a stunning pocket garden, creating a public space between the vibrant streets and the calmness of the hotel, offering an oasis in the heart of East London.

The expressive and distinctive design for the new Nobu Hotel Shoreditch is the result of the collective efforts of Ron Arad Architects and Ben Adams Architects featuring overhanging floor slabs and cantilevered steel beams forming a frayed edge to the east, where a landscaped garden is terraced to provide natural light to the restaurant space.
The interior of the hotel was designed by local designers, Studio Mica. All parties worked in collaboration to create a seamless transition between the hotel and the restaurant. The 240-seat, Nobu Shoreditch restaurant was designed by Studio PCH. Inspired by the iconic Nobu aesthetics, the 340m² restaurant space’s sleek wooden finish creates a cool and contemporary environment. Known around the world, Nobu cuisine is an innovative interpretation of Japanese, Peruvian and other South American elements pioneered by Chef Nobu Matsuhisa and influenced by his years of studying Japanese cuisine in Tokyo and his extensive travels. Overseen by Executive Chef Greg Seregithe, Nobu Shoreditch menu will feature many of Nobu’s timeless dishes, such as Black Cod Miso and Yellowtail Sashimi with Jalapeno, as well as plates inspired by the creativity and vibrancy of the local area. Reached via a grand staircase, Nobu Shoreditch is bathed in natural light from the five-metre tall glass doors leading out to the charming Nobu Terrace.

Perfect for open air dining, the terrace, which can entertain up to 80 people, is split into four level terraces and available for private functions. Guests can also enjoy the semi-private dining space overlooking the custom-built, open kitchen. Hosting up to 18 people, this is the perfect spot from which to experience the theatre of the Nobu kitchen. Behind the Nobu Shoreditch bar, an eclectic collection of vintage sakes, limited edition Japanese whiskies and rare champagnes are displayed for the discerning drinker. The separate Lobby Bar on the ground floor is also available to both guests and the public, offering an comfortable atmosphere. Alongside a range of Nobu dishes and award-winning cocktails, the Lobby Bar provides a sophisticated retreat in which to socialise, relax or watch the world go by. The adaptable Kaijo meeting and event spaces at Nobu Hotel Shoreditch cater to a range of occasions, from family celebrations to business conferences. Boasting an abundance of natural light and a versatility, Kaijo can be used as one large space of 180m², accommodating 200 people for a cocktail reception or 120 for a seated event, or divided into six separate spaces.

This site uses Akismet to reduce spam. Learn how your comment data is processed.